The Bekins story began over 123 years ago when Sjoerd Bekuis emigrated to Michigan, married his wife Tiertje, and raised a family of 13 children in a community of Dutch farmers.

It was his 5th child, Martin who founded what has grown into the Bekins Moving and Storage of today. 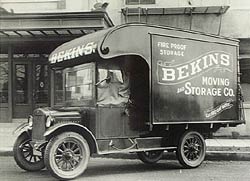 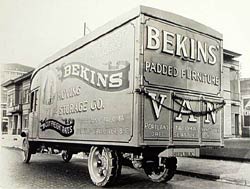 In 1880, Martin Americanized his name to Bekins and was the first to leave the family farm. He settled in Grand Rapids where he was soon joined by his brother John. They both got jobs driving freight wagons during the day. In the nights they attended school to learned the fundamentals of the cartage business. It was in that profession they made their life's work. Over the years, the brothers were pioneers in "inventing" the moving and storage business as we know it today.

In 1891, they formed Bekins Van Lines with Sioux City, Iowa as their headquarters. Their 12 employees, 3 horse drawn carriages and a single warehouse, let Bekins averaged 1-2 moves per day. During the next decade, and following the westward movement, they opened offices in Omaha, Los Angeles and Chicago.

Bekins Moving and Storage was the first company to specialize in moving household goods. In 1903, it was the first to introduce covered moving vans and motor trucks to the west coast. The original fleet consisted of two trucks powered by two-cylinder, air-cooled engines. By the end of WWI, Bekins had disposed of its last horse drawn van.
Bekins also built the first reinforced steel and concrete warehouse, for the fireproof storing household goods.

In 1903, Daniel Bekins, the youngest of the Sjoerd Bekius clan, expanded the family operation to Seattle, establishing Bekins Northwest. Daniel went on to established Bekins first Canadian office, located in Vancouver, BC, in 1924, He purchased what was later to be known as "The Sun Building", at Pender and Beatty. It was and still remains an impressive structure, and it was the tallest building in the British Commonwealth when it was built in 1913. By the early 1930's, Daniel had expanded Bekins Northwest to include facilities in Portland, Tacoma, Spokane, and Denver. During this time Bekins established Western Canada's first fleet of motorized moving vehicles, in a period when road conditions were at best primitive. Bekins determination to provide the finest quality of service resulted in a Canadian fleet that was second to none in the Canadian Moving Industry.

In 1935, as Daniel Bekins neared retirement, he put his five sons in charge of Bekins Northwest. Bekins sold its original Vancouver Building to the Vancouver Sun in 1937. Bekins then built its "new" facility at the west end of the Burrard bridge, more specifically at Chestnut and York Streets. The state of the art moving and storage facility, in that time, served as the head office for the Canadian operation for over the next 40 years. It still stands today, acting as a Canadian Tire store. 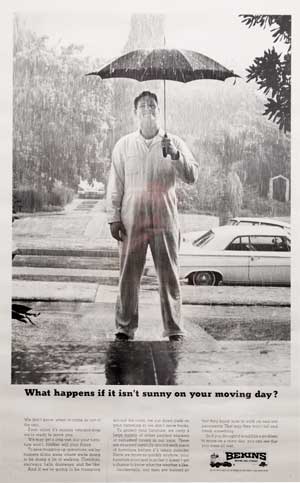 In 1956, Bekins built a second warehouse, this time at Kingsway and Wilson in Burnaby, where Metrotown now sits. During this time, Daniel's son Stanley took over as president of the company. Stanley Bekins built up one of the largest and most respected moving companies in the country, before retiring and selling the company in 1982 to the Baron Group of Toronto, who then became, by far, the largest mover in Canada.

The Baron Group subsequently sold the two Bekins buildings in 1983 as they custom designed and built a 42,000 square foot building on three acres at Crestwood Corporate Center in Richmond. In 1993, the Richmond head office of Bekins Moving and Storage was acquired by Larry and Sharon Rosenberg, returning the company to a locally owned, family business. 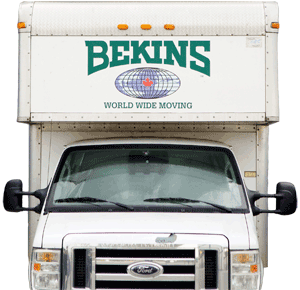 The Rosenberg's, along with their Arbutus Transfer Ltd., acquired Cantin's Moving and Storage, a long time member of United Van Lines in 1995 and became a member of United Van Lines. 1997 then saw the creation of dedicated operations for international moving, removals and in transit storage plus freight forwarding, under the name Bekins Worldwide.

In 2018, their Canadian head office was moved to a new purpose built moving and storage facility at 3779 - 190 St in Surrey, BC. The largest of its kind in Canada with an optimally designed secure possession storage environment.

Dedicating 100’s of world wide professionals and 1000’s of pieces of equipment, across continents, to the benefit of families and organizations making international moves, relocations and transfers. Click here for client reviews.